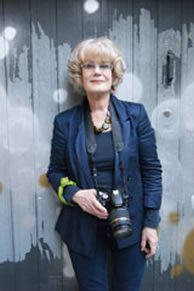 BARBARA CHANDLER is a best-selling photographer who has exhibited widely, including prestigious shows in London’s West End (more details are below).
Barbara's signed, mounted and framed prints have also been sold worldwide from London to Paris, Milan, Dublin and Japan. Habitat, when trading on Regent Street, produced an edition of signed mounted and framed prints to complement Barbara’s show Love London, and these completely sold out.
Barbara Chandler's book LOVE LONDON was published in 2011 (see details below).

Barbara Chandler is self-taught. Using her own work, she has been making cards by hand since the early 90s, calling her range IMAGES TO FRAME. Each card has a genuine photographic print, stuck down, titled and signed by Barbara. A stamp on the back guarantees authenticity. These cards were sold for many years by The Conran Shop, and now there is a wide selection for sale on this website. Some of the images have sold into thousands.

Barbara Chandler is also well-known as a specialist writer on design and the home (including furnishing, decoration, kitchens, bathrooms and so on), currently contributing regularly to Homes & Property at the London Evening Standard, for whom she has written for over 20 years: www.homesandproperty.co.uk.
She has also written for Ideal Home magazine, the Sunday Times, House & Garden and many other publications. She has won many Awards, including Contribution to the Design Industry, Furniture Writer of the Year, and Home Improvements Journalist of the Year. She has written many books. Currently, Barbara Chandler chaired the judges of the annual Homes & Gardens Designer Awards, and writes a monthly column for this magazine. Homes & Gardens gave Barbara Chandler a Lifetime Achievement Award in 2016.

2020 VISION in September 2014 at Earls Court exhibition hall celebrated 20 years of 100% Design, a leading design show within the London Design Festival. Barbara Chandler selected 20 designers who had shown at 100% Design over the years, from all periods of the show, and photographed each one in a way that reflects their work and surroundings. The photographs were on display at the show, each with accompanying text written by Barbara.
Barbara Chandler has had many more exhibitions since her first photographic show over 30 years ago.
JOY OF DESIGN was a show of close-on 70 photographs at designjunction, one of the four major events of the London Design Festival in September 2013. Joy of Design featured designers and design personalities – some big names, some relatively unknown – which Barbara Chandler had photographed over many years in the course of her work as a specialist design writer for publications such as the London Evening Standard. For more details, please visit www.joyofdesign.net
Barbara Chandler's show CELEBRATION was shown during the summer of 2012 at the Pitfield Gallery and design shop, Pitfield Street, N1. It celebrated the unique multi-culture of London's streets, with in particular images inspired by the Royal Wedding, the Olympics, and the Jubilee.
The VISIONS OF POLAND series was exhibited in Warsaw, and then four times in London, the most recent being in 2009 as part of Tent London at the Truman Brewery in East London.
The exhibition STREET MUSIC (of street musicians all over London) was shown in the crush bar of the old Covent Garden Opera House in 1995. This was the start of the Love London portfolio.
A show at the West Soho Gallery followed, entitled BARBARA CHANDLER'S LONDON.
THE HIDDEN HEART OF HACKNEY (people and places) went on show in 1999.
The LOVE collection was exhibited in London in 2004.
Then came the show LOVE LONDON itself, which was in the Habitat picture gallery on Regent Street in the heart of London's West End in 2008. This show was the impetus for the Love London book which followed in 2011.